Used with permission from: https://www.presbyterianmission.org/story/pt-0321-easter/ 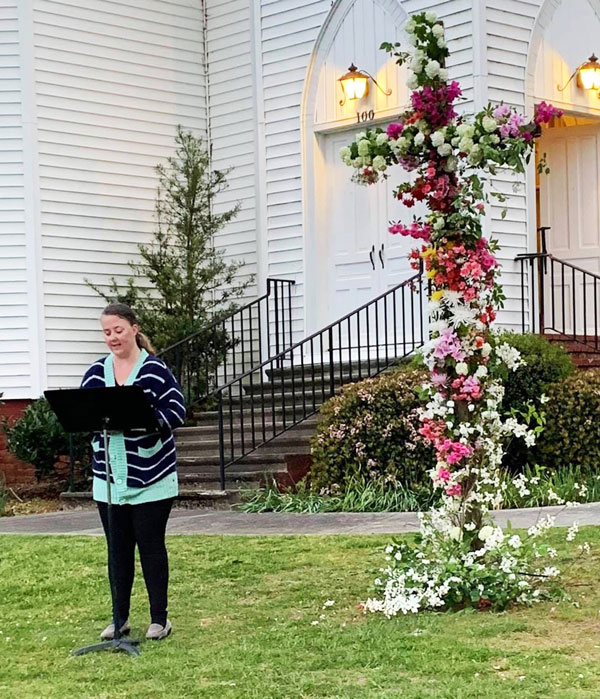 Last Easter, I drove by the church I once served and slowed down. I couldn’t believe my eyes. The wooden cross my father had made was standing on the weathered stairs bursting with colorful flowers. They had never placed the cross outside before, but now there it was, and it made me smile. In my time there as pastor, I had wanted the chicken wire-wrapped cross so that I could introduce the congregation to the tradition known as the “flowering of the cross.”

It’s a tradition where on Easter morning, a barren wooden cross is transformed into a symbol of new life by the adorning of flowers, thus the chicken wire to hold the stems in place. The exact origins of the flowering of the cross cannot be pinpointed to any one denomination nor any specific time in history, except that references to flowering crosses began appearing in art as early as the sixth century. Some say, too, that perhaps the flowering of the cross has its genesis in a legend where it is said that the tears Mary shed at the foot of Jesus’ cross miraculously turned into flowers. I learned about the flowering of the cross while working for an Episcopal diocesan newspaper. After Easter Sunday, I discovered my editor’s inbox flooded with pictures of flowering crosses submitted by pastors and church secretaries. I was curious and captivated — and committed to bringing this tradition to my someday congregation.

On a cold and gray New England Easter morning, that someday congregation was introduced to the flowering cross, also referred to as “the living cross.” With the first soaring notes of “Christ the Lord Is Risen Today,” the black fabric draping the cross on Good Friday was removed. Children then clambered to the front of the sanctuary and proceeded to decorate every inch of the cross with the flowers that were placed in baskets. By the time the congregation finished singing, the cross — the emblem of suffering and shame, as the old hymn tells us — was now the emblem of redemption and hope.

I looked at the flowering cross now standing on the steps of the church that, like many others, had to forgo Easter worship as they knew it because of a coronavirus that had begun sweeping the country as the 2020 Lenten season began. I had wondered if they still used the cross as part of their Easter proclamation. They did. And now, in a time of COVID-19, someone had the idea of bringing the flowering cross outdoors so that the community could see and be touched with the Easter message: All is not lost.

This little church in upstate New York was not the only one with a flowering cross sitting on its lawn. In Owensboro, Kentucky, First Presbyterian Church erected its first flowering cross in 2020. According to Jeff Moles, director of Christian education and mission, offering the flowering cross was “a meaningful way for people to engage” with people driving by the church to drop off flowers that were added by church members. Other churches like Park Hill Presbyterian Church in North Little Rock, Arkansas, adapted the flowering of the cross to a paper flowering instead, said the Rev. Marie Mainard O’Connell. “We asked the congregation to color two or three different flowers and mail them to us. We then used them to build a flowered cross in our great window that faces the street,” she said.

The message of hope being alive and well is an Easter message still needed in 2021 as congregations face many uncertainties. And while worshiping in person in a sanctuary this year is still questionable, many churches will be returning to the tradition of the flowering of the cross as a way to not only share the good news of the resurrection, but as a way to connect with one another and the community.

What does peace mean to you?
Scroll to top